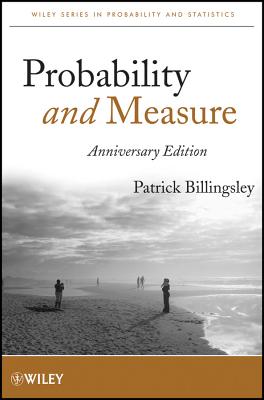 Praise for the Third Edition

It is, as far as I'm concerned, among the best books in math ever written....if you are a mathematician and want to have the top reference in probability, this is it. (Amazon.com, January 2006)

A complete and comprehensive classic in probability and measure theory

Probability and Measure, Anniversary Edition by Patrick Billingsley celebrates the achievements and advancements that have made this book a classic in its field for the past 35 years. Now re-issued in a new style and format, but with the reliable content that the third edition was revered for, this Anniversary Edition builds on its strong foundation of measure theory and probability with Billingsley's unique writing style. In recognition of 35 years of publication, impacting tens of thousands of readers, this Anniversary Edition has been completely redesigned in a new, open and user-friendly way in order to appeal to university-level students.

This book adds a new foreward by Steve Lally of the Statistics Department at The University of Chicago in order to underscore the many years of successful publication and world-wide popularity and emphasize the educational value of this book. The Anniversary Edition contains features including:

Patrick Billingsley was a first-class, world-renowned authority in probability and measure theory at a leading U.S. institution of higher education. He continued to be an influential probability theorist until his unfortunate death in 2011. Billingsley earned his Bachelor's Degree in Engineering from the U.S. Naval Academy where he served as an officer. he went on to receive his Master's Degree and doctorate in Mathematics from Princeton University.Among his many professional awards was the Mathematical Association of America's Lester R. Ford Award for mathematical exposition. His achievements through his long and esteemed career have solidified Patrick Billingsley's place as a leading authority in the field and been a large reason for his books being regarded as classics.

This Anniversary Edition of Probability and Measure offers advanced students, scientists, and engineers an integrated introduction to measure theory and probability. Like the previous editions, this Anniversary Edition is a key resource for students of mathematics, statistics, economics, and a wide variety of disciplines that require a solid understanding of probability theory.

Patrick Billingsley was Professor Emeritus of Statistics and Mathematics at the University of Chicago and a world-renowned authority on probability theory before his untimely death in 2011. He was the author of Convergence of Probability Measures (Wiley), among other works. Dr. Billingsley edited the Annals of Probability for the Institute of Mathematical Statistics. He received his PhD in mathematics from Princeton University.