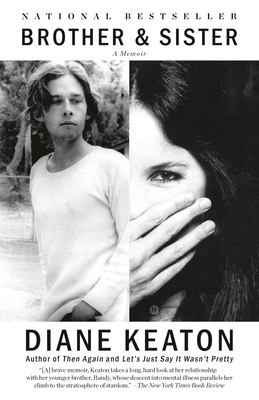 When they were kids in the suburbs of Los Angeles in the 1950s, Diane Keaton and her younger brother, Randy, were best friends and companions. But as they grew up, Randy became troubled, then reclusive. Before he was thirty, he was divorced, an alcoholic, a man who couldn’t hold on to full-time work—his life a world away from his sister’s, and from the rest of their family. Now Diane delves into the nuances of their shared, and separate, pasts to confront the difficult question of why and how Randy ended up living his life on “the other side of normal.” In beautiful and fearless prose intertwined with journal entries, letters, and poetry—much of it Randy’s own—and supplemented by personal photographs and artwork, this insightful, heartfelt memoir contemplates the inner workings of a family, the ties of love and responsibility that hold it together, and the special bond between siblings—even those who are pulled far apart.

DIANE KEATON has starred in some of the most memorable films of the past forty years, including the Godfather trilogy, Annie Hall, Manhattan, Reds, Baby Boom, The First Wives Club, and Something's Gotta Give. Her many awards include the Golden Globe and the Academy Award. She is the author of the New York Times bestselling memoir Then Again and the essay collection Let's Just Say It Wasn't Pretty. Keaton lives with her daughter and son in Los Angeles.

“[A] brave memoir . . . Keaton takes a long, hard look at her relationship with her younger brother, Randy, whose descent into mental illness parallels her climb to the stratosphere of stardom.”
—The New York Times Book Review

“With prose as quirky and affecting as her on-screen personas, Diane Keaton’s third memoir is the most wrenching yet.”
—O, The Oprah Magazine

“[A] poignant story about two siblings, Brother & Sister is a fascinating exercise in writing a personal and methodical tale about someone who has come to feel, in some sense, like a stranger.”
—The Atlantic

“A powerful account of one family’s struggle with mental illness.”
—The New Yorker

“An exercise in the redemptive power of admitting weakness and error.”
—The Washington Post

“Candid. . . . A raw, often difficult read. . . . In clean, piercing prose, [Keaton] examines midcentury American family dynamics and gender roles. . . .‘I want to have another chance at being a better sister,’ Keaton writes in the book’s final pages, and she’s embracing what time she and Randy have left to do just that.”
—USA Today

“A new book by [Diane Keaton] is always an event worth paying attention to. [Brother & Sister] tenderly traces her evolving relationship with her younger brother.”
—Entertainment Weekly

“A deeply personal portrait of Diane Keaton’s family [and] a beautiful look at the bonds and barriers of siblinghood.”
—Literary Hub

“Fascinating. . . . Fitting for a performer who tries to bring to life the lives of others, Keaton continually tries to grasp what makes her brother tick. . . . Tough-minded, unvarnished and, finally, affecting in the extreme.”
—Columbus Dispatch

“[Keaton] intimately describes loving and living with a troubled sibling, tracing her childhood with her brother Randy. . . . Illustrating years they spent both together and apart, Keaton showcases the difficulties of loving someone you can never fully understand.”
—Time

“Immersive and haunting . . . Keaton eloquently and unflinchingly examines her younger brother’s life, drawing from excerpts of his poetry and her mother’s journals and letters . . . A cohesive, honest look at an entire family impacted by a troubled individual, as well as how Keaton maintained a bond with her sibling despite tremendous challenges.”
—Library Journal

“Poignant. . . . Keaton thoughtfully wrestles with her conscience while attempting to assemble a clearer picture of her brother's nature. She sheds her whimsical persona to explore difficult burdens, which those with an unstable sibling will recognize.”
—Kirkus Reviews

“A resonant family memoir—a slim but weighty book. Keaton focuses on her complex relationship with her younger brother, whose escalating instability—vividly described—affected Keaton, her parents, and her two sisters. . . . A haunting meditation on mortality, sibling love, mental illness, and regret.”
—Publishers Weekly