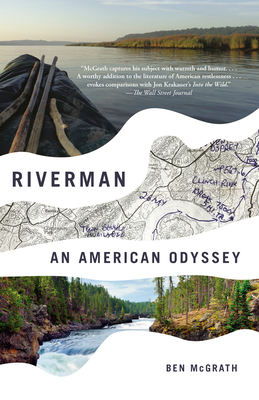 “This quietly profound book belongs on the shelf next to Jon Krakauer’s Into the Wild.” —The New York Times

The riveting true story of Dick Conant, an American folk hero who, over the course of more than twenty years, canoed solo thousands of miles of American rivers—and then disappeared near the Outer Banks of North Carolina. This book “contains everything: adventure, mystery, travelogue, and unforgettable characters” (David Grann, best-selling author of Killers of the Flower Moon).

For decades, Dick Conant paddled the rivers of America, covering the Mississippi, Yellowstone, Ohio, Hudson, as well as innumerable smaller tributaries. These solo excursions were epic feats of planning, perseverance, and physical courage. At the same time, Conant collected people wherever he went, creating a vast network of friends and acquaintances who would forever remember this brilliant and charming man even after a single meeting.

Ben McGrath, a staff writer at The New Yorker, was one of those people. In 2014 he met Conant by chance just north of New York City as Conant paddled down the Hudson, headed for Florida. McGrath wrote a widely read article about their encounter, and when Conant's canoe washed up a few months later, without any sign of his body, McGrath set out to find the people whose lives Conant had touched--to capture a remarkable life lived far outside the staid confines of modern existence.

Riverman is a moving portrait of a complex and fascinating man who was as troubled as he was charismatic, who struggled with mental illness and self-doubt, and was ultimately unable to fashion a stable life for himself; who traveled alone and yet thrived on connection and brought countless people together in his wake. It is also a portrait of an America we rarely see: a nation of unconventional characters, small river towns, and long-forgotten waterways.

BEN McGRATH is a longtime staff writer for The New Yorker. He lives outside New York City in a small town on the Hudson, with his wife and two children. This is his first book.

A BEST BOOK OF THE YEAR: The New Yorker

“A portrait of forgotten American byways and the eccentric characters who populate them, a cursory history of river travel in America and, not least, an effort to solve the riddle of Conant himself — not only his whereabouts but also his elusive and irresistible nature.… In an age when everything is relentlessly online and the real world is increasingly mediated through screens, Conant and his canoe represent something slower and quieter, closer to nature.”
—Gregory Cowles, The New York Times

“Superb...McGrath captures his subject with warmth and humor… A worthy addition to the literature of American restlessness, Riverman draws on what Mr. McGrath hails as the ‘river-trip canon,’ which includes Lewis and Clark and Huckleberry Finn…and… evokes comparisons with Jon Krakauer’s Into the Wild.”
—Heller McAlpin, The Wall Street Journal

"An affecting book that calls to mind Into the Wild and Nomadland...Riverman...brims with the rich possibilities of a fully lived life and expectations exceeded."
—The Economist

"This astonishing narrative is part detective story, part remembrance, and wholly faithful to a decent man full of peculiarities. Conant’s body was never found, but McGrath did something better for readers: he discovered Dick Conant the man."
—Air Mail

“Fascinating…A diptych…rich with detail…A story that wends its way through the fluid state of American masculinity in our tumultuous times.”
—Lorraine Berry, StarTribune

"Touching...McGrath...gives us readers a sense of meeting the one-of-a-kind Conant ourselves. Equal parts historically detailed and distinctly personal, Riverman is not only the biography of one man but an anthology of the riverside towns both small and large that have been the centuries-old lifeblood of an America that has always quietly existed."
—Avenue

"An intoxicating account of an American original named Richard Conant, an inveterate river wanderer whose travels throughout America revealed methodical planning, great endurance, a touch of foolhardiness and no small amount of physical courage for a man not in the best of health… A fascinating story with heart, grit and consummate flow."
—Bill Thompson, The Post and Courier

"A terrific feat...Riverman is nonfiction at its best."
—Cary Knapp, Coastal Illustrated

"Exquisitely written and deeply reported, Riverman is a gem of a book. It contains everything: adventure, mystery, travelogue, and unforgettable characters. Most of all, it illuminates the wonderful curiosities of life."
—David Grann, bestselling author of Killers of the Flower Moon

“Riverman is as miraculous and hopeful as its protagonist, the Zelig of America's waterways, Dick Conant. It’s a great book for people like me, who read Into the Wild but have shed our self-destructive wanderlust and settled into middle-age. This book will make you want to buy a canoe and spend less time on Instagram.”
—Emma Straub, bestselling author of All Adults Here

“This is a beautifully told and near-mythical tale of one man’s quest to find peace through communion with nature, and through perpetual motion. My heart was deeply stirred by Riverman, and by Ben McGrath’s brilliant, clear, and humane storytelling. This one will stay with me for a long time.”
—Elizabeth Gilbert, bestselling author of City of Girls

"McGrath’s reconstruction of Dick Conant’s tangled career and yearning soul is so meticulous, so obsessive, that Conant comes to life on the page as vividly as any character in American literature. Conant wanted his story told. Here it is, in all its pathos and sheer unlikeliness. You will never see rivers and the towns on their banks the same way after reading Riverman. Ditto, I predict, for expansive, raggedy strangers."
—William Finnegan, bestselling author of Pulitzer Prize winner Barbarian Days

"The captivating story of an inveterate river wanderer who left a mark on many he met along his journeys before suddenly vanishing... A paean to eccentricity and endurance and a study of a life that changed the chronicler’s own perceptions. McGrath’s writing is measured and confident, the product of a journalist’s persistence in investigating the truth behind so colorful and contradictory a figure... A memorable and intoxicating exploration of what we make of those who reinvent themselves."
—Kirkus, starred

"McGrath retraces the remarkable life of this gentle man whose life on the water touched so many. Riverman honors a free-spirited American naturalist and modern-day explorer (a blend of Forrest Gump, Huck Finn, and even Don Quixote) who shucked a conventional lifestyle for complete freedom, at significant personal cost. A masterpiece of narrative nonfiction."
—Booklist, starred

"McGrath exquisitely recovers the life of the affable transcontinental canoeist who had intrigued him when they once met on the Hudson River...McGrath does more than chronicle Conant’s life through the folkways and lives of those in the river towns he visited; he evokes a magical, almost wistful, dimension to this genial, manatee-shaped character in overalls."
—The National Book Review

"An intriguing character study for anyone interested in the life of a man with an adventurous spirit and an engaging personality, who collected friends across the country.”
—Library Journal