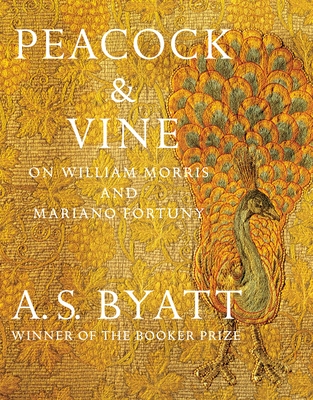 By A. S. Byatt
$26.95
On Our Shelves Now (PLEASE CALL TO CONFIRM BEFORE COMING TO STORE)

From the winner of the Booker Prize: A ravishing book that opens a window into the lives, designs, and passions of Mariano Fortuny and William Morris, two remarkable artists who themselves are passions of the writer A. S. Byatt.

Born a generation apart in the mid-1800s, Fortuny and Morris were seeming opposites: Fortuny a Spanish aristocrat thrilled by the sun-baked cultures of Crete and Knossos; Morris a member of the British bourgeoisie, enthralled by Nordic myths. Through their revolutionary inventions and textiles, both men inspired a new variety of art that is as striking today as when it was first conceived. In this elegant meditation, Byatt traces their genius right to the source.

Fortuny’s Palazzo Pesaro Orfei in Venice is a warren of dark spaces imbued with the rich hues of Asia. In his attic workshop, Fortuny created intricate designs from glowing silks and velvets; in the palazzo he found “happiness in a glittering cavern” alongside the French model who became his wife and collaborator, including on the famous “Delphos” dress—a flowing, pleated gown that evoked the era of classical Greece.

Morris’s Red House outside London, with its Gothic turrets and secret gardens, helped inspire his stunning floral and geometric patterns; it likewise represented a coming together of life and art. But it was a “sweet simple old place” called Kelmscott Manor in the countryside that he loved best—even when it became the setting for his wife’s love affair with the artist Dante Gabriel Rossetti.

Generously illustrated with the artists’ beautiful designs—pomegranates and acanthus, peacock and vine—among other aspects of their worlds, this marvel-filled book brings the visions and ideas of Fortuny and Morris to vivid life.

A. S. BYATT is the author of numerous novels, including The Children’s Book, The Biographer’s Tale, and Possession, which was awarded the Booker Prize. She has also written two novellas, published together as Angels & Insects, five collections of short stories, and several works of nonfiction. A distinguished critic and author, and the recipient of the 2016 Erasmus Prize for her “inspiring contribution to ‘life writing,’” she lives in London.

“A charming, generously illustrated, slim volume about two geniuses the likes of whom we have not seen in a while . . . William Morris and Mariano Fortuny each left a strong imprint on our decorative vocabularies. In chapters that visit their houses, their inspirations, and their signature motifs, Byatt explains how she was drawn to these ‘two obsessive workers, endlessly inventive, endlessly rigorous, endlessly beautiful.’ Each lived and worked with a belief that artisans should have the status of artists, a surprisingly contemporary view . . . These handsomely decorated pages are most successful in evoking the ‘sensual pleasure’ Byatt derived from her project. When I closed Peacock & Vine, my thoughts lingered not just on Morris and Fortuny but on all those artists who have thrown open windows on our history, enriching us with the touch of their hands—and their hearts.” —Dominique Browning, The New York Times Book Review

“Fascinating . . . Wouldn’t it be lovely to be an artist whose existence was so whole, so seamless, that life and art would flow together indistinguishably, like water in a river? This book is a reflection on two whose lives achieved this end. Each chapter explores a different element of Morris and Fortuny’s lives and art: their houses, their travels (physical and mental), their fabric designs. The concluding chapters explore the innovative but related use both men made of two motifs, pomegranates and birds. While both Morris and Fortuny are of interest in their own right, it is Byatt’s cross-boundary connections that provide excitement.” —Patricia Hagen, Minneapolis StarTribune

“Enticing . . . a richly associative, lushly illustrated exploration of how Morris and Fortuny focused [their] insatiability into a variety of forms. Byatt also offers peeks into her own creative processes, and some of her abiding interests—color and light, among them.  A personal essay [in which] her ideas flow as smoothly and intricately as a Fortuny gown.” —Doug Childers, Richmond Times-Dispatch

“Charming . . . Byatt outlines the lives and passions—both intellectual and romantic—of two multitalented artist-designers who have captured her imagination. [The] illustrated Peacock & Vine contrasts the gracious gowns of the Venetian Fortuny with the English Morris’s ornate patterns, and their ‘geometry of branches and petals and fruits.’” —ELLE Décor

“An impassioned dual appreciation of two 19th century creators who turned their lives into art: William Morris, known for his own writings and his association with the Pre-Raphaelite Brotherhood, [and] Mariano Fortuny, an Italian fashion designer whose brilliant dresses and gowns earned him a lasting name in high art circles. In Remembrance of Things Past, Proust dressed his character Albertine in a Fortuny gown; Isadora Duncan danced in them, and decades later, Susan Sontag chose to be buried in on. . . . Although the two men were born generations and worlds apart and did not intersect, for Byatt, both embody the idea of constant creativity and workmanship. They were artists and artisans; the world was their studio; and neither was ever restricted to a single means of expression. Morris was a devotee of nature while Fortuny was devoted to the female form, but both had rigorous and highly ordered imaginations. They challenge Byatt to look deeper and express more . . . An amply illustrated, inspiring homage that forges illuminating connections between two dynamos.” —Kirkus Reviews

“Booker Prize-winning novelist Byatt persuasively makes the case for viewing the achievements of two seemingly dissimilar designers in the same light. The English-born William Morris came from a bourgeois background, and looked to the medieval Christian tradition for inspiration for his fabric and textile designs. Mariano Fortuny, who was descended from an aristocratic Spanish family and designed fabrics in his Venice studio, had an imagination steeped in Mediterranean culture. Byatt finds kinship in their indebtedness to classic traditions, and the balance of beauty and utility that they strove for in their productions. Byatt is an unabashed enthusiast of both her subjects, and her passion for their work enlivens every sentence of her text. Abundant color illustrations bear out her contention that both men ‘changed the visual world around them.’” —Publishers Weekly