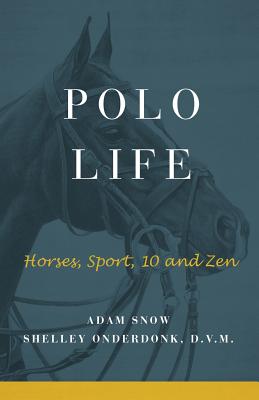 Polo Life: Horses, Sport, 10 and Zen delves into the world of high goal polo through the uniquely situated lenses of former 10-goaler Adam Snow and his wife and veterinarian, Shelley Onderdonk. Together their voices provide unprecedented access into the horse and human dynamics that make the sport tick; their passion, respect, and commitment for the sport and each other shine through each page. Less polo manual than human interest story, their chapters cover a broad range of topics: there is a horse so good she probably single-handedly altered the trajectory of Adam's career, a farm named after the city where the couple met in college, and a country and polo culture that shaped Adam as a player...and where their luggage was stolen more than once. Adam recounts his childhood obsession with ball sports; Shelley hers with horses. Together, they reveal how sports psychology has been integral to Adam's success, tell behind-the-scenes stories about teammates, grooms and trainers, celebrate their legendary equine partners, and provide an uncensored glimpse into the glamorous international component of the sport from Buenos Aires to Bandar Seri Begawan. The dynamics of maintaining a healthy marriage and family within the framework of a professional athlete's career are also fundamental to Adam and Shelley's polo life. Their prose-by turns humble, humorous, and inspirational-showcases the sport's enduring appeal.

Adam Snow is in his third decade as a professional polo player. He fully engages in the sport at many levels: there is a childlike fascination with the ball, an adrenaline junkie's love for speed, and a college graduate's immersion in strategic machinations. He has played polo on four continents for hundreds of teams. Highlights of his career include US Open wins in 2002 and 2006, a 10-goal handicap for three years, Player of the Year awards in 1997 and 2003, and induction into the Polo Hall of Fame in 2014. Currently, Adam is also a broadcast analyst for polo productions on NBCSports. He graduated from Yale in 1987 with a BA in History. Shelley Onderdonk graduated Cum Laude from Yale in 1989 with a BA in Psychology and Biology. She taught for the Yale-China Association for two years before returning to the United States to enroll in veterinary school. After obtaining her DVM from the University of Georgia in 1997, she went on to become a certified veterinary acupuncturist. Shelley's practice focuses on sport horses and integrative medicine. Together, Adam and Shelley manage New Haven Farm, their horse farm in Aiken, South Carolina. They breed and train polo ponies and maintain Adam's playing ponies, striving to be sustainable stewards of their land while providing an ideal center for all their horses to thrive. They both work with the United States Polo Association furthering polo development in the US. In 2001, they were featured in a NatureSeries PBS documentary Horse & Rider. They are the proud parents of three boys-Dylan, Nathan, and Aidan.