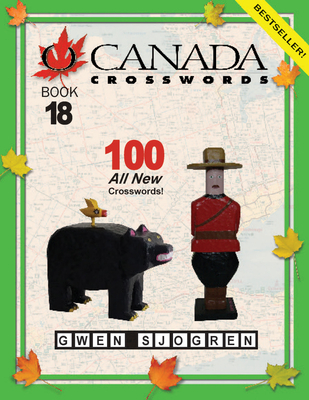 This is book number 18 in the O Canada Crosswords series.

Climb aboard the O Canada Crosswords express and embrace the adventure of 100 new crosswords. The 18th instalment of this popular series features several wordplay puzzles--including "Rank and Guile," "Sounds Fishy to Me" and "Forecast: Fun!"--as well as a suitcase full of Canadiana like "Quotable Notables," "Witty Women," "Au Naturel" and "Great Scotts!" Along the way, you'll stop off in Hamilton and Quebec, disembark at Rio to relive Canada's Olympic achievements and detour to Sweden to celebrate hockey stars who lit up the NHL.

Fifteen puzzles veer off the beaten track, including four circle-in-the-square offerings, and three with hidden shapes or phrases embedded in the grids. For an extra cerebral challenge, five puzzles have no fill-in-the-blank clues. Author Gwen Sjogren also debuts a new format called Four-Square, in which solvers complete four mini puzzles to unlock a CanCon phrase.

With 97 larger grids, O Canada Crosswords Book 18 takes you on brainteasing journey across 13,000+ clues. So punch your ticket for hours of trivia, puns and fun!

Gwen Sjogren, one of Canada's top crossword designers, has earned the esteem of crossword fans by producing hundreds of puzzles with intriguing themes, witty wordplay and creative layouts. Sjogren has designed thirteen crossword collections, including the last seven in the O Canada Crosswords series. Originally from Hamilton, Ontario, she now lives in Calgary, Alberta. She's been a guest on many radio broadcasts including CBC Radio across the country and Victoria's CFAX 1070, as well as featured in many newspapers.