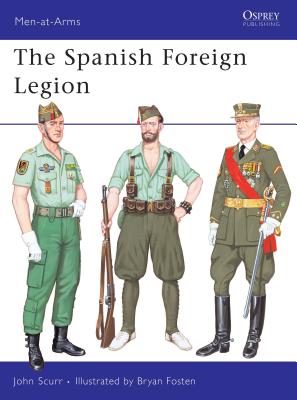 By John Scurr, Bryan Fosten (Illustrator)
$19.00
This title is out of stock indefinitely and not available to order.

Although overshadowed by its French counterpart, the Tercio de Extrangeros, 'Regiment of Foreigners' has a rich and eventful history beginning with its formation in 1920. Under the command of LtCol Millán Astray and Comandante Francisco Franco, the Spanish Foreign Legion developed into a formidable force, led by Astray's belief that 'to die in combat is the greatest honour.' This book examines the main campaigns in which the Legion participated, from Melilla in 1921-23 until its withdrawal from the Sahara in 1976. A wealth of contemporary photographs and colour plates detail the uniforms and insignia of the Spanish Foreign Legion.

John Scurr was born in Edinburgh in 1931. He studied at Boroughmiur Secondary School where he obtained a Scottish Higher Education Certificate. He was called for National Service from 1941-51, when he served in Malaya with the Kings Own Yorkshire Light Infantry. In 1964 he settled into local government in London, from which he took early retirement in 1992. John Scurr has written three Osprey titles among a host of other books.