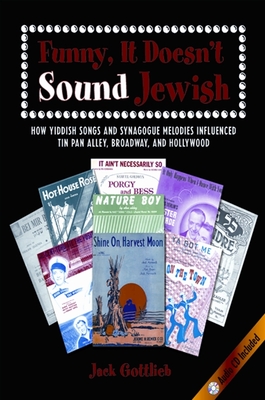 By Jack Gottlieb
Email or call for price.
Hard to Find

In Funny, It Doesn't Sound Jewish, Jack Gottlieb chronicles how Jewish songwriters and composers transformed the popular music of mid-twentieth-century America. Although many critics, historians, and musicians have alluded to the Jewish influence on American popular song, this is the first book ever to support such assertions with comprehensive musical examples. Drawing on a variety of historical and archival sources, as well as his own experiences as a composer of synagogue, popular, and concert music, Gottlieb carefully and compellingly documents how a minority culture infused a majority culture, enriched it, and still retained its own identity. He does this with the support of a companion CD that includes previously unrecorded songs as well as some surprising rarities performed by the likes of Judy Garland, Billie Holiday, and Leonard Bernstein.

Author and composer Jack Gottlieb has lectured on the Jewish contribution to American popular music throughout the United States, Canada, and Israel. He is past president of the American Society for Jewish Music and has received wide recognition for both his synagogue and secular music. He has been a reviewer and author of articles on music as well as an annotator for concert program and record jacket notes. His choral, chamber, and theater and cabaret works, as well as his sacred music--including Songs of Godlove, over 50 solos and duets--are available in print. His recordings appear on the Naxos, Albany, and other labels. He lives in New York City.