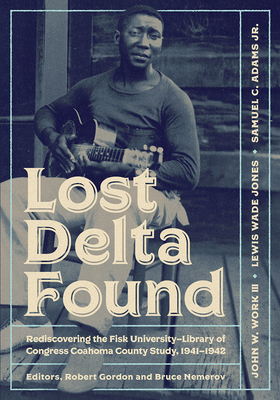 Blues Hall of Fame Inductee--Named a "Classic of Blues Literature" by the Blues Foundation, 2019 This remarkable book recovers three invaluable perspectives, long thought to have been lost, on the culture and music of the Mississippi Delta. In 1941 and '42 African American scholars from Fisk University--among them the noted composer and musicologist John W. Work III, sociologist Lewis Wade Jones, and graduate student Samuel C. Adams Jr.--joined folklorist Alan Lomax of the Library of Congress on research trips to Coahoma County, Mississippi. Their mis­sion was "to document adequately the cul­tural and social backgrounds for music in the community." Among the fruits of the project were the earliest recordings by the legendary blues singer and guitar­ist Muddy Waters. The hallmark of the study was to have been a joint publica­tion of its findings by Fisk and the Library of Congress. While this publication was never completed, Lost Delta Found is com­posed of the writings, interviews, notes, and musical transcriptions produced by Work, Jones, and Adams in the Coahoma County study. Their work captures, with compelling immediacy, a place, a people, a way of life, and a set of rich musical tra­ditions as they existed in the 1940s.
Illustrated with photos and more than 160 musical transcriptions.

John W. Work III (1901-1966) was a gifted composer and educator. One of the first African American academics to argue the value of African American folk music, he preserved this heritage both in his book, American Negro Songs and Spirituals, and through his work with the Fisk Jubilee Singers, which he directed from 1947 until 1956. He retired from Fisk University in 1966. Lewis Wade Jones (1910-1979) was an instructor in the Department of Social Sciences at Fisk University from 1932 to 1942, where he worked closely with Charles S. Johnson. In 1949 the two co-wrote A Statistical Analysis of Southern Counties: Shifts in the Negro Population of Alabama. After leaving Fisk, Jones moved to the Tuskegee Institute School of Education, where he was a professor of sociology. After receiving his master's degree from Fisk University, Samuel C. Adams jr. (1920-2001) attended the University of Chicago, where he received his PhD in 1953. He had a long and distinguished career in public service, highlighted by his appointment to the post of Ambassador to the Republic of Niger in 1968-1969. Robert Gordon is a writer and Emmy Award-winning filmmaker. His most recent book is Memphis Rent Party: The Blues, Rock & Soul in Music's Hometown. Bruce Nemerov has been, variously, a musician, radio and record producer, and writer. He was awarded a Grammy for the notes to John W. Work III: Recording Black Culture, an album of Work's field recordings.