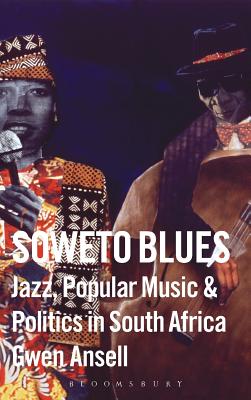 By Gwen Ansell
Email or call for price.
Usually Ships in 1-5 Days

A major new contribution to the study of African music, Soweto Blues tells the remarkable story of how jazz became a key part of South Africa's struggles in the 20th Century, and provides a fascinating overview of the ongoing links between African and American styles of music. Ansell illustrates how jazz occupies a unique place in South African music. Through interviews with hundreds of musicians, she pieces together a vibrant narrative history, bringing to life the early politics of resistance, the atmosphere of illegal performance spaces, the global anti-apartheid influence of Hugh Masekela and Miriam Makeba, as well as the post-apartheid upheavals in the national broadcasting and recording industries. Featuring an introduction by Abdullah Ibrahim, Soweto Blues is a fitting tribute to the power of music to inspire optimism and self-expression in the darkest of times.

FROM THE INTRODUCTION
This book tells of the journeys-in both directions-between village and city, between saxophone and cellphone, between Langa and Cape Town, between America and Africa that, over the past century, have created the unique sound dubbed 'South African Jazz'. The term itself is contentious. As in America, some politically-aware South African players dislike the term for its social connotations. 'The term jazz was used to describe the music of brothels. It was simply another way of denigrating the creativity of African musicians, ' says percussionist and composer Ndikho Xaba. And, as in the rest of the world, many musical explorers resent the constraints of an externally defined musical box.
In South Africa, apartheid overlaid the word with other, more sinister connotations. In some critical and ethno-musicological contexts, the music was evaluated by the degree of its American-ness and denigrated as impure when it employed African idioms in composition or playing. Also under apartheid, the white authorities found it unacceptable that black musicians should be acknowledged as capable of playing such 'sophisticated' music. And so symbolic annihilation became part of the hegemonic staging and broadcasting of jazz. Playing behind a screen at Cape Town City Hall while a white musician mimed his notes, reedman Winston Mankunku Ngozi was billed as Winston Mann. In radio broadcasts, pianist Tony Schilder heard himself re-christened Peter Evans, and trumpeter Johnny Mekoa became Johnny Keen.

Gwen Ansell is Director of the Institute for the Advancement of Journalism in South Africa. She wrote and produced Ubuyile: Jazz Coming Home, an 8-part radio series broadcast in South Africa in 2001.