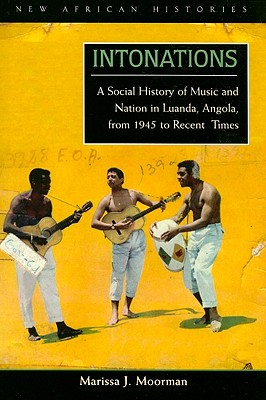 Intonations tells the story of how Angola’s urban residents in the late colonial period (roughly 1945–74) used music to talk back to their colonial oppressors and, more importantly, to define what it meant to be Angolan and what they hoped to gain from independence. A compilation of Angolan music is included in CD format.

Marissa J. Moorman presents a social and cultural history of the relationship between Angolan culture and politics. She argues that it was in and through popular urban music, produced mainly in the musseques (urban shantytowns) of the capital city, Luanda, that Angolans forged the nation and developed expectations about nationalism. Through careful archival work and extensive interviews with musicians and those who attended performances in bars, community centers, and cinemas, Moorman explores the ways in which the urban poor imagined the nation.

The spread of radio technology and the establishment of a recording industry in the early 1970s reterritorialized an urban-produced sound and cultural ethos by transporting music throughout the country. When the formerly exiled independent movements returned to Angola in 1975, they found a population receptive to their nationalist message but with different expectations about the promises of independence. In producing and consuming music, Angolans formed a new image of independence and nationalist politics.

Marissa J. Moorman is Professor of African History and Cinema and Media Studies at Indiana University. She is the author of Intonations: A Social History of Music and Nation in Luanda, Angola, 1945 to Recent Times. She is on the editorial board of Africa Is a Country, where she regularly writes about politics and culture.

“Through extensive interviews with singers and musicians and archival materials that survived civil wars, this well-written, engaging, and innovative study filled with illustrations, informative footnotes, and an audio CD is an outstanding contribution to the literature of independence movements. Summing Up: Highly recommended.”—CHOICE

“If you’re a reluctant reader, do yourself a favour: buy a copy of this elegantly written and engaging book and listen to the fantastic CD included in the plastic sleeve at the back! Once you’ve swayed and shimmied to some of the greats, including Urbano de Castro, N’Gola Ritmos and Paulo Flores, you will be dying to know more. Moorman doesn’t simply provide translations – often in two languages – of her chosen tracks, she shares her meticulous research to tell the story of how Angolans in Luanda’s shanty towns used music to talk back to the colonisers. Her book is packed with information drawn from national radio archives and many extensive interviews with some of the country’s foremost musicians. An academic historian, Moorman is a clean writer who has produced a very compelling piece of work. I refer to Intonations as ‘my bible’.”—The I. B. Taurus Blog

“Marissa J. Moorman presents a fascinating social and cultural history of the relationship between Angolan culture and politics. Intonations deals with the subversive possibilities of popular music in Angola’s shantytowns during the struggle for independence…. The writing is fresh, clever, and the argument nuanced and layered….”—World of Music

“The book on the subject (of the role of music in the Angolan independence movement.)”—Afropop Worldwide

“Intonations makes a significant contribution to our understanding of how Angola became what it is today, and it also makes a serious case for why popular music is political in surprising and unsettling ways.”—African Studies Review

“The writing is fresh, tight, clever. The argument is nuanced and layered. It’s analytical but also deeply personal. Intonations is a provocative and compelling book.”
— Anne Pitcher, author of Transforming Mozambique: The Politics of Privatization, 1975–2000

“This engaging and provocative study places urban Angolans at the center of the freedom movement narrative by exploring the emergence of the semba music scene in the musseques or shantytowns of Luanda…. the CD alone is worth the cover price.”
— Oral History Review

“Marissa Moorman convincingly demonstrates that culture not only reflected, but was also constitutive of national identity. She shows that ordinary folks and non-political elites played as big a part in the construction of independent Angola as those involved in the liberation struggle.…All in all, the book is clearly structured, conscientiously produced, and provides true reading pleasure.”
— Africa: Journal of the IAI