The Encyclopedia of Native Music: More Than a Century of Recordings from Wax Cylinder to the Internet (Paperback) 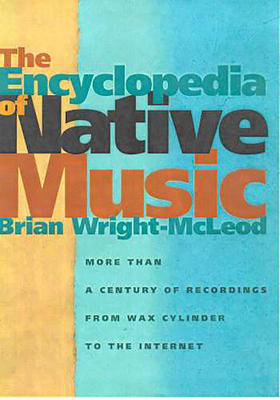 Want the word on Buffy Sainte-Marie? Looking for the best powwow recordings? Wondering what else Jim Pepper cut besides “Witchi Tai To”? This book will answer those questions and more as it opens up the world of Native American music.

In addition to the widely heard sounds of Carlos Nakai’s flute, Native music embraces a wide range of forms: country and folk, jazz and swing, reggae and rap. Brian Wright-McLeod, producer/host of Canada’s longest-running Native radio program, has gathered the musicians and their music into this comprehensive reference, an authoritative source for biographies and discographies of hundreds of Native artists.

The Encyclopedia of Native Music recognizes the multifaceted contributions made by Native recording artists by tracing the history of their commercially released music. It provides an overview of the surprising abundance of recorded Native music while underlining its historical value.

With almost 1,800 entries spanning more than 100 years, this book leads readers from early performers of traditional songs like William Horncloud to artists of the new millennium such as Zotigh. Along the way, it includes entries for jazz and blues artists never widely acknowledged for their Native roots—Oscar Pettiford, Mildred Bailey, and Keely Smith—and traces the recording histories of contemporary performers like Rita Coolidge and Jimmy Carl Black, “the Indian of the group” in the original Mothers of Invention. It also includes film soundtracks and compilation albums that have been instrumental in bringing many artists to popular attention. In addition to music, it lists spoken-word recordings, including audio books, comedy, interviews, poetry, and more.

With this unprecedented breadth of coverage and extensively cross-referenced, The Encyclopedia of Native Music is an essential guide for enthusiasts and collectors. More than that, it is a gateway to the authentic music of North America—music of the people who have known this land from time immemorial and continue to celebrate it in sound.

Brian Wright-McLeod (Dakota-Anishnabe) began working as a music journalist in 1979. His column “Dirty Words and Thoughts about Music” appears bimonthly in News from Indian Country. His activist work in Native rights took him to the airwaves on CKLN 88.1 FM in Toronto in 1985, where he continues to produce and host Renegade Radio, a live two-hour weekly music and issues program.

“I cannot say enough good things about this book. The author, whose twenty years as a Native radio host and Native music columnist provide him an insider’s knowledge, has written a truly encyclopedic volume that combines discography, biographical sketches, and the history and cultural backgrounds of the many categories of Native music that now exist.”—Parabola