The House at the Edge of Night: A Novel (Paperback) 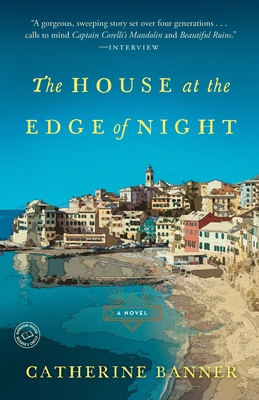 “A perfect summer read [that] brims with heart . . . Don’t be surprised if you keep turning the pages long into the night, spellbound by its magic.”—The Denver Post

A sweeping saga about four generations of a family who live and love on an enchanting island off the coast of Italy—combining the romance of Beautiful Ruins with the magical tapestry of works by Isabel Allende.

“Captivating . . . [Catherine] Banner’s four-generation saga is set on an island near Sicily, where myths of saints get served up with limoncello at the Esposito family’s bar. . . . The island is fictional, but consider this dreamy summer read your passport.”—People

“A lusty page-turner that weaves romance, rivalry and the intricacies of family expectations into one glorious tale.”—Minneapolis Star Tribune

Castellamare is an island far enough away from the mainland to be forgotten, but not far enough to escape from the world’s troubles. At the center of the island’s life is a café draped with bougainvillea called the House at the Edge of Night, where the community gathers to gossip and talk. Amedeo Esposito, a foundling from Florence, finds his destiny on the island with his beautiful wife, Pina, whose fierce intelligence, grace, and unwavering love guide her every move. An indiscretion tests their marriage, and their children—three sons and an inquisitive daughter—grow up and struggle with both humanity’s cruelty and its capacity for love and mercy.

Spanning nearly a century, through secrets and mysteries, trials and sacrifice, this beautiful and haunting novel follows the lives of the Esposito family and the other islanders who live and love on Castellamare: a cruel count and his bewitching wife, a priest who loves scandal, a prisoner of war turned poet, an outcast girl who becomes a pillar of strength, a wounded English soldier who emerges from the sea. The people of Castellamare are transformed by two world wars and a great recession, by the threat of fascism and their deep bonds of passion and friendship, and by bitter rivalries and the power of forgiveness.

Catherine Banner has written an enthralling, character-rich novel, epic in scope but intimate in feeling. At times, the island itself seems alive, a mythical place where the earth heaves with stories—and this magical novel takes you there.

Praise for The House at the Edge of Night

“Like pictures of a childhood summer, or a half-forgotten smell, this book is sweet and heady with nostalgia . . . [and] comforting as a quilt.”—NPR

“Rich and immersive, this book will take you away.”—Vox

“A masterful piece of storytelling, infused with the miraculous (both in stories and in everyday life) while maintaining the difficult balance between the explainable versus the inexplicable . . . captivating and beautifully rendered.”—Sara Gruen, author of At the Water’s Edge

Catherine Banner was born in Cambridge, England, and began writing at the age of fourteen. She has published a trilogy of young adult novels. She studied English at Fitzwilliam College, Cambridge, and has taught at schools in the United Kingdom. The House at the Edge of Night is her debut adult novel. She lives in Turin, Italy, with her husband.

“Banner’s four-generation saga is set on an island near Sicily, where myths of saints get served up with limoncello as the Esposito family’s bar. As the captivating characters are challenged by war, financial crisis and heartbreak, their bonds hold them together. The island is fictional, but consider this dreamy summer read your passport.”—People

“Like pictures of a childhood summer, or a half-forgotten smell, this book is sweet and heady with nostalgia; not radical, maybe, but comforting as a quilt.”—NPR

“A gorgeous, sweeping story set over four generations . . . The novel calls to mind Captain Corelli’s Mandolin and Beautiful Ruins. It is not just the protagonists and their struggles that make Banner’s narrative incredible, but also the smaller, secondary characters that add color and detail, and the intricately described island of Castellamare itself.”—Interview

“Rich and immersive, this book will take you away.”—Vox.com

“In a luminous homage to the Italian tradition of storytelling, Catherine Banner’s second novel is a lusty page-turner that weaves romance, rivalry and the intricacies of family expectations into one glorious tale. . . . There are echoes of Italo Calvino in Banner’s writing—echoes of admiration and love. Reading The House at the Edge of Night is like falling into a fantastical world where time stands still, yet change happens at an unimaginable pace.”—Star-Tribune

“[Banner’s] touch is light and her style accommodates both the foibles and magical thinking of Castellamare’s more curious inhabitants and the subtler moments of happiness and heartbreak her main characters experience across several generations.”—The Dallas Morning News

“A perfect summer read, made for those balmy evenings on your porch with a glass of wine. . . . The story brims with heart, dreamy folk tales and beautifully written passages about the people who call the island home. . . . Just don’t be surprised if you keep turning the pages long into the night, spellbound by its magic.”—The Denver Post

“A fantastic Italian escape . . . So fine-tuned are the historic events within [The House at the Edge of Night] that one almost forgets that Castellamare doesn’t actually exist. Just like the characters, the reader is torn between the romance of island life and the world beyond.”—BookPage

“This knockout adult debut by young British author Banner is guaranteed to draw comparisons to Beautiful Ruins, Cutting for Stone, and The House of the Spirits, whisking us away to a world grounded in both reality and myth, filled with marvelously peculiar characters, plotted on a grand scale.”—Kirkus Reviews

“[The House at the Edge of Night] has a touch of magical realism that filters down from the island’s many legends. . . . Banner deftly touches on weightier themes while weaving an enchanting narrative.”—Publishers Weekly

“Catherine Banner’s latest is a masterful piece of storytelling, infused with the miraculous (both in stories and in everyday life) while maintaining the difficult balance between the explainable versus the inexplicable. Through the life of a single man—a man not noteworthy in the eyes of the world—and his family, Banner touches on such broad themes as community and the way global events play out in individual lives and larger society. And just as the broader themes affect the more personal ones, Banner’s style echoes the book’s content: The House at the Edge of Night is captivating and beautifully rendered.”—Sara Gruen, author of At the Water’s Edge

“My admiration for The House at the Edge of Night is boundless. Catherine Banner’s writing is preternaturally mature, distinct, clear, and strikingly beautiful. As I read on, I felt the resonance of classic legend and myth, the stuff of Homer, building around this world that is timeless yet utterly its own. . . . A gorgeous, deeply moving novel of life across a sweep of time and generations.”—Peter Nichols, author of The Rocks

“To the long, eclectic tradition of the island novel, The House at the Edge of Night is a sparkling addition. Catherine Banner has created a vast world unto itself of the fictional island of Castellamare, intricately compressed and marvelously textured—a feat reserved for the most ingenious and intuitive of writers. That this is Catherine Banner’s first adult novel makes it all the more remarkable.”—Nicholas Christopher, author of A Trip to the Stars