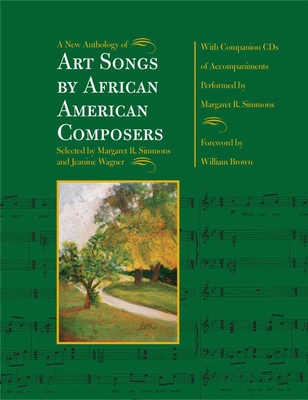 A diverse repertoire of art songs for piano and voice

The art song—a delicate and inspiring blend of mu­sic and poetry—has been performed by singers and pianists and appreciated by audiences around the world for more than two hundred years. While collec­tions of art songs abound, this welcome volume and its accompanying compact discs make readily avail­able the contributions of contemporary African American composers to the popular genre. Including thirty-nine pieces for voice and piano created since 1968 by eighteen artists, ANew Anthology of Art Songs by African American Composers navigates a varied musical terrain from classical European tradi­tions to jazz and spirituals. With nearly half of the featured songs composed by women and with others by lesser-known and emerging composers, this im­portant collection offers a diverse, representative sampling of African American art songs and works to secure the places of these songs and artists in the canon of contemporary American music.

Selected by Jeanine Wagner and Margaret R. Simmons, prolific and celebrated performers who have presented recitals throughout the world featur­ing the art songs of African American composers, this dazzling new repertoire of twentieth-century music is cogently framed by a thorough introduction and sub­stantial biographies of each composer. The compact discs feature piano tracks of all thirty-nine composi­tions.

Margaret R. Simmons, pia­nist, is aprofessor of music at Southern Illinois University Carbondale. She has per­formed throughout the coun­try as a member of the Aulos Trio and the Klarion Trio and has won acclaim as a recitalist with numerous professional singers.

Jeanine Wagner, soprano, is a professor of music and assis­tant director of the School of Music at Southern Illinois Uni­versity Carbondale. The 1994 winner of the Artist Presenta­tion Award in St. Louis and the 1992 winner of the Mu Phi Epsilon International Compe­tition, she was named an Inter­national Finalist in the Luciano Pavarotti competition and has been a Regional Win­ner in the Metropolitan Opera auditions.

“For decades now, we have had no significant publication of black art songs from anyone. Simmons and Wagner’s collection begins to fill in that deep and wide chasm. With this collection, singers and teachers will have a most significant volume of art songs—displaying the times, traditions, moods, and sensitivities of the black American culture.”—Robert J. Harrison, University of Colorado at Boulder