Making Records: The Scenes Behind the Music (Hardcover) 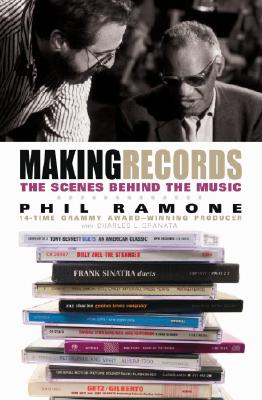 Sinatra. Streisand. Dylan. Pavarotti. McCartney. Sting. Madonna. What do these musicians have in common besides their super-stardom? They have all worked with legendary music producer Phil Ramone. For almost five decades, Phil Ramone has been a force in the music industry. He has produced records and collaborated with almost every major talent in the business. There is a craft to making records, and Phil has spent his life mastering it. For the first time ever, he shares the secrets of his trade.Making Records is a fascinating look "behind the glass" of a recording studio. From Phil's exhilarating early days recording jazz and commercial jingles at A&R, to his first studio, and eventual legendary producer status, Phil allows you to sit in on the sessions that created some of the most memorable music of the 20th century -- including Frank Sinatra's Duets album, Bob Dylan's Blood on the Tracks, Ray Charles's Genius Loves Company and Paul Simon's Still Crazy After All These Years. In addition to being a ringside seat for contemporary popular music history, Making Records is an unprecedented tutorial on the magic behind what music producers and engineers do. In these pages, Phil offers a rare peek inside the way music is made . . . illuminating the creative thought processes behind some of the most influential sessions in music history. This is a book about the art that is making records -- the way it began, the way it is now, and everything in between.

Phil Ramone was born in 1931. A violin prodigy, he studied at Juilliard before establishing his first music studio in 1961. In addition to his producing activities, Ramone is also extremely active in music and service related organizations. He is the Chairman Emeritus of the Board of Trustees of the National Academy of Recording Arts and Sciences (NARAS) and the Producers and Engineers Wing, and is a Trustee of the MusiCares Foundation. He lives in Westchester County, NY.