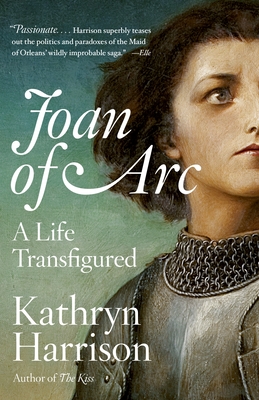 By Kathryn Harrison
$16.95
On Our Shelves Now (PLEASE CALL TO CONFIRM BEFORE COMING TO STORE)

Kathryn Harrison gives us a Joan of Arc for our time—a shining exemplar of unshakable faith, extraordinary courage, and self-confidence on the battlefield, in the royal court, during a brutally rigged inquisition and imprisonment, and in the face of her death. In this new take on Joan’s story, Harrison deftly weaves historical fact, myth, folklore, scripture, artistic representations, and centuries of scholarly and critical interpretation into a fascinating narrative, revitalizing our sense of Joan as one of the greatest heroines in all of human history.

KATHRYN HARRISON has written the novels Thicker Than Water, Exposure, Poison, The Binding Chair, The Seal Wife, and Envy and Enchantments. Her autobiographical work includes The Kiss, Seeking Rapture, The Road to Santiago, and The Mother Knot. She has also written a biography, St. Therese of Lisieux, and a book of true crime, While They Slept: An Inquiry Into the Murder of a Family. She lives in Brooklyn with her husband, the novelist Colin Harrison, and their three children.

“Passionate. . . . Harrison superbly teases out the politics and paradoxes of the Maid of Orleans’ wildly improbable saga.” —Elle

“It remains, after nearly 600 years, a story to break your heart . . . . It is Joan’s rambunctious humanity as much as her divinity that makes her powerful, both for modern audiences and historians.” —The New York Times Book Review

“Stunning. . . . A layered portrait not only of Joan’s life, but of her times. . . . [Harrison] awes us with her incisive intelligence, her fierce curiosity, her literary prowess.”
—The Boston Globe

“Working from trial records and modern literature, the Bible and Bresson, Harrison marshals all the forces. The result is sumptuous, as rich and radiant as Joan’s (apocryphal) golden cloak.”
—Stacy Schiff, Pulitzer Prize–winning author of Cleopatra

“It is impossible for Harrison to write an uninteresting book. She is too skilled a prose writer, too good a storyteller, too alert to passions and the human heart to produce a work that ever flags. But read Joan of Arc for what it tells you about the world in which the subject lived and the half-millennium of culture that has continued to mythologize her. In this striking volume, it is clear that Joan fell victim to more than an era’s intolerance. She became a victim to other dreamers’ dreams." —Marie Arana, The Washington Post

“If you aren’t already in thrall to the ‘Maid of Orleans’, you might be by the end of Kathryn Harrison’s Joan of Arc. . . . [It] builds Joan’s story with such novelistic detail and grace that the author’s rapture becomes ours.” —The Oregonian

“Vivid and compelling. . . . Suffused with a novelist’s imagination. . . . Creative flourishes enliven Harrison’s book from its retelling of Joan’s spectacular anomalous career to the long and equally fascinating story of her ‘afterlife’ in books, movies, and the popular imagination.”
—Open Letters Monthly

“If you want a badass heroine like Hushpuppy in Beasts of the Southern Wild crossed with The Girl with the Dragon Tattoo (only with angels and Jesus) read Kathryn Harrison's hair-raising bio of Joan of Arc—the best of six I've read. She weaves a mesmerizing tale of this cross-dressing warrior who made her torturers weep, who plowed her way to the throne and led an army while never shedding a drop of blood. This year's cult book.”
—Mary Karr, author of The Liars’ Club and Lit

“In Harrison’s telling, Joan loses her mythic accessories, but the unadorned truth is more than enough.” —Minneapolis Star Tribune

“I’m impressed by the way Kathryn Harrison so brilliantly blends narrative and scholarship in this gorgeous rendering of Joan of Arc’s story. Harrison draws on her deep understanding of religion, feminism and literature to produce the biography of one of the most interesting women in history. She was a mystery, a virgin, visionary, soldier and martyr, and Harrison shows vividly how all these strands connect. If you’ve never quite managed to get around to reading a book about Joan of Arc (I hadn’t), this is the one to read. If you’ve read all the others, you’ll need to read this one, too.” —Roxana Robinson, author of Georgia O’Keeffe: A Life

“Harrison joins the psychobiography school of life writing, doing so with memorable writing and an energetic approach.” —Kirkus Reviews

“Compulsively readable. . . . In novelist Harrison’s deft hands, the latest analysis is both vividly detailed and historically grounded. Casting a modern eye on a medieval legend, she is able to breathe new life into the girl, the warrior, the messenger from God, and the saint.”
—Booklist