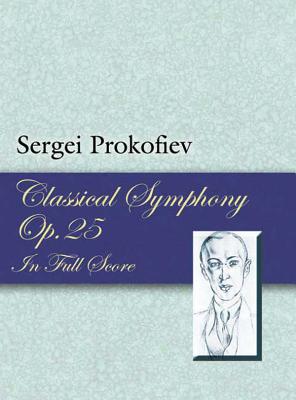 Prokofiev's first symphony, which he mischievously dubbed "Classical," is a sprightly piece based on the symphonic models of Haydn. "I thought that if Haydn were alive today he would compose just as he did before, but at the same time would include something new in his manner of composition," Prokofiev remarked. "I wanted to compose such a symphony: a symphony in the classical style."
The composer's synthesis of twentieth harmonies and timbres with eighteenth-century structure and form has captivated audiences since its premiere in 1918. This is Prokofiev's most frequently performed symphonic work, and this edition is meticulously reproduced from an authoritative early source.

Sergei Prokofiev (1891-1953) was a Russian pianist, conductor, and composer who mastered several genres and is one of the major composers of the 20th century. His best-known works are the five piano concertos, nine completed sonatas, and seven symphonies. He also created the Romeo and Juliet ballet, Peter and the Wolf, and other family classics.