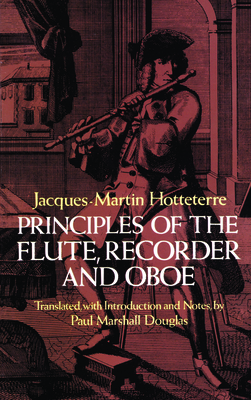 The finest flutist of his time and honored Fl te de la Chambre du Roi at the court of Louis XIV, Jacques-Martin Hotteterre (c. 1680-1760) wrote this instruction book for the transverse flute, recorder, and oboe. This treatise (originally titled Principes de la Fl te) was an important force in the competition between the flute and recorder and hastened the virtual extinction of the recorder as either an ensemble or solo instrument.
The Principes has considerable practical use today, as well as being a treatise of central importance in the historical development of the flute. Most important, it contains an extensive discussion of principal ornaments and embellishments of the period (appoggiaturas, springers, terminated trills, vibrati, and mordents) and their proper and tasteful use. This information will be valuable to modern wind players of all kinds, instrumentalists in general, and musicologists. The long section treating the technique of the 7-hole transverse flute -- an ancestor of the modern instrument -- also has some modern applicability. While the 7-hole flute is far more primitive, it does have important elements in common with the modern instrument. The section on the recorder (an instrument which has not undergone change since the Principes was written) is an important period instruction book, as valuable to recorder players of today as it was to their counterparts in the eighteenth century.
Curiously, in spite of its historical and practical interest, Hotteterre's treatise has not previously been available to the English-speaking world. Paul Marshall Douglas of the University of British Columbia has provided the first modern English-language translation in this edition. He has also included an introduction giving the known facts of Hotteterre's life, describing the eighteenth-century contest between flute and recorder, and noting the common usage of wind instruments at the time.