God and the State (Paperback) 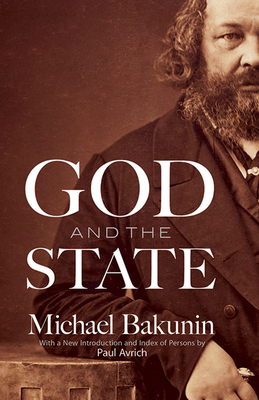 Among the 19th-century founders of modern philosophical anarchism, none is more important than Michael Bakunin (1814-76). Born into the Russian nobility, he renounced his hereditary rank in protest against Czarist oppression and fled to Western Europe. A colorful, charismatic personality, Bakunin quickly became central to the anarchism movement, and everyone involved either built upon or reacted to his ideas. Yet Bakunin, despite the power of his ideas, was primarily a man of action, and he wrote little. His only major work, God and the State, remained unfinished, although it is the torso of a giant.God and the State has been a basic anarchist and radical document for generations. It is one of the clearest statements of the anarchist philosophy of history: religion by its nature is an impoverishment, enslavement, and annihilation of humanity. It is the weapon of the state. It must be smashed, according to Bakunin, before the right of self-determination can be possible. As an introduction to anarchist thought, a manifesto of atheism, or as a summing-up of the thoughts of Bakunin, God and the State remains a mind-opening experience, even for those basically unsympathetic to its premise.