Schumann: The Faces and the Masks (Hardcover) 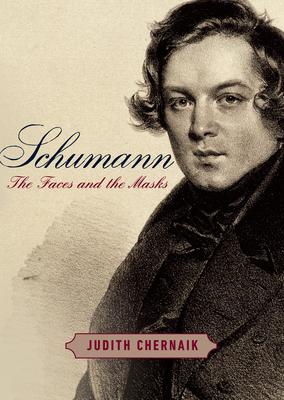 By Judith Chernaik
$30.00
Email or call for price.

Drawing on previously unpublished sources, this groundbreaking biography of Robert Schumann sheds new light on the great composer’s life and work. With the rigorous research of a scholar and the eloquent prose of a novelist, Judith Chernaik takes us into Schumann’s nineteenth-century Romantic milieu, where he wore many “masks” that gave voice to each corner of his soul. The son of a book publisher, he infused his pieces with literary ideas. He was passionately original but worshipped the past: Bach and Beethoven, Shake­speare and Byron. He believed in artistic freedom but struggled with constraints of form. His courtship and marriage to the brilliant pianist Clara Wieck—against her father’s wishes—is one of the great musical love stories of all time. Chernaik freshly explores his troubled relations with fellow composers Mendelssohn and Chopin, and the full medi­cal diary—long withheld—from the Endenich asylum where he spent his final years enables her to look anew at the mystery of his early death. By turns tragic and transcendent, Schumann shows how this extraordinary artist turned his tumultuous life into music that speaks directly—and timelessly—to the heart.

Judith Chernaik was born and grew up in Brooklyn. She graduated from Cornell University and received a Ph.D. from Yale University. She has taught at Columbia, Tufts, and Queen Mary College in London. Her books include The Lyrics of Shelley and four novels. She has also written a play, and most recently has published essays on Robert Schumann, Clara Schumann, Mendelssohn, and Chopin in the British academic journal The Musical Times.

She and her husband, Warren Chernaik, have been living in London for the last forty years, where she founded Poems on the Underground, which under various names, has since spread all over the world.

“A generous and tremendously useful resource . . . Without hitting you over the head, Chernaik allows you to feel the core of Schumann’s story. [She] gets the incredible essence of how he offloaded his difficult emotional world onto an imaginary band of alternative identities, partly for survival, partly to fight the philistine world on better terms. . . . Schumann’s spirit comes across as an antidote to all the hate and perverse self-love we are forced to swallow in public affairs, day after day. . . .  If you take the time to read Chernaik’s new biography, your life outlook may improve.” —Jeremy Denk, The New York Times Book Review (front cover)

“This densely informative biography also provides a comprehensive listening guide to [Schumann’s] music. . . . For Chernaik, the music illuminates the story of a man with ‘more feeling than judgment,’ who emerged as one of the most influential Romantic composers, before a harrowing descent into madness.” —The New Yorker

“Chernaik is an enthusiastic student of Schumann’s music and a fine chronicler of his turbulent life. Schumann: The Faces and the Masks is a well-proportioned, highly readable biography for general readers that establishes Schumann as a man thoroughly of his time. The book’s greatest contribution is to situate Schumann in a remarkable fraternity of 19th-century composers.” —Michael O’Donnell, The Wall Street Journal

“[Schumann] was an artist of great humanity, a humanity that shines through his musical legacy along with that of his wife, Clara, a brilliant pianist and gifted composer in her own right. Now they have both found a modern biographer, Judith Chernaik, who does them justice with grace and insight. . . . Ms. Chernaik deserves high applause both for reviving an important chapter in musical history and for giving a truly harmonious account of one of the greatest musical love stories of all time.” —Aram Bakshian Jr., The Washington Times

“Engrossing . . . A most touching and moving story, beautifully told . . . [Chernaik] understands the poetry of Schumann’s soul and she communicates with quiet urgency the pity of his story and the beauty of his music. If her intention was that by reading this, we’d be inspired to go back to his music with a deeper appreciation, it has worked for me.” —Ysenda Maxtone Graham, Daily Mail

“The turbulent life of Robert Schumann, with its final tragic descent into madness, is particularly suitable for biographical treatment. So there’s a distinct bonus in having the experienced literary scholar and novelist Judith Chernaik tackling it so successfully. . . . With Schumann, she has produced an accessible and much needed study expressly aimed at the intelligent general reader rather than the pure subject specialist . . . In her description of Schumann’s difficult and unstable character, [Chernaik] displays great sympathy, sensitivity and psychological insight. . . . Moreover, Chernaik is also musically well-informed, in love with her subject, conversant with the abundant source of materials, some recently discovered, and with such leading authorities as John Daverio and Eric Sams. Thus she is admirably equipped to deal with the way in which a considerable amount of Schumann’s compositions is so closely enmeshed with a wide range of British and German poets and writers. . . . Schumann’s attempted suicide in 1854 and admission to a private mental institution at Endenich are described by Chernaik in great detail with the benefit of the recently published medical diary of its director, and with remarkable empathy for the unimaginable pain he must have suffered as his mind became assailed by terrifying thoughts.” —Andrew Thomson, The Musical Times

“Fascinating . . . Well-documented . . . The author [presents] to us a fully formed Schumann, and we are able to appreciate the richness of his life, expansive range of his music and the humanity of his numerous failures.” —Wylheme H. Ragland, The Decatur Daily

“Perhaps it takes a novelist to get inside Schumann’s turbulent imagination: step forward Judith Chernaik, scholar of another pre-eminent early Romantic, Shelley. Fresh insights emerge from access to the composer’s medical records, and consideration of his output as a writer of words as well as music. It’s a tale as gripping as any thriller.” —Pianist

“A vivid, sympathetic portrait of emerging genius. . . . Sound on the music, the book is superb on the life. This is the most readable and penetrating biography of this wonderful composer whose life touches modern sensibilities at so many points.” —Stephen Walsh, The Oldie

“It would be a strong woman or man who was not shaken by Chernaik’s account of what this sweetest and most vulnerable of men, purveyor of the loveliest, most fantastical and tender of all musical inventions, endured. . . . Schumann’s story has been told from various perspectives, psychoanalytical, cultural, historical. Chernaik has chosen, shrewdly, to tell it through the music, since Schumann’s life is, to a unique degree, incorporated into it—in coded references to himself, to Beethoven, to Bach, to his contemporaries Chopin and Mendelssohn, above all to his wife Clara . . . All of this is ingeniously embedded in his music, even at its most apparently spontaneous and passionate, and Chernaik, a one-woman musical Bletchley Park, has brilliantly decoded it.” —Simon Callow, The Sunday Times (London)

“Enthralling . . . Beautifully written, excellently researched, and shot through with love and understanding of her subject . . . [With] a number of fascinating illustrations . . . A most recommendable book.” —Robert Matthew-Walker, Musical Opinion

“A sharp, knowing, and complicatedly sympathetic treatment . . . Not only does [Chernaik’s] book feature some of the most passionate appreciations of Schumann’s music ever written in English, but she leaves her readers very specific and very encouraging instructions on how to find every last note of that music for free online . . . The story of the music . . . is expertly intertwined with the well-known details of the weird broken-field obstacle-course that was the man’s life . . . A tremendously persuasive portrait.” —Steve Donoghue, Open Letters Review

“An affecting and moving biography . . . Chernaik pays close attention to the music and summons its inimitable combination of romantic ardour, eccentricity and classical craftsmanship in deft prose.” —Ivan Hewett, lead review in The Daily Telegraph

“[An] intimate biography . . . [Chernaik], who betrays a close acquaintance with the composer’s oeuvre, offers a very personal take on his life . . . While providing ample discussion of the classical works, [she] eschews technical language and musical notation . . . Highly recommended.” —Herbert E. Shapiro, Library Journal

“Altogether outstanding. . . . [Schumann’s] story is oft-told, but Chernaik’s version eclipses its predecessors in two, perhaps three, respects. She has accessed newly released documentation of Schumann’s final illness . . . She fills the book with descriptions of Schumann’s compositions that are more easily followed and more thorough than most recording liner notes and that convincingly relate each piece to Schumann’s life circumstances as well as to his other music . . . The third distinction stems from the fact that Chernaik is also a novelist. She doesn’t get bogged down in data or scholarly one-upmanship, her vocabulary is direct and strong, and she keeps the line of Schumann’s life ever before us.” —Ray Olson, Booklist (starred review)

“A guided tour through the life and work of Robert Schumann (1810-1856), a musical genius who viewed the sublime before a decline into syphilitic madness. . . . A sturdy foundation of research and musical knowledge (and love) underlies this inspiring and wrenching account of a man who pursued, captured, and lost.” —Kirkus Reviews (starred review)