The Big Payback: The History of the Business of Hip-Hop (Paperback) 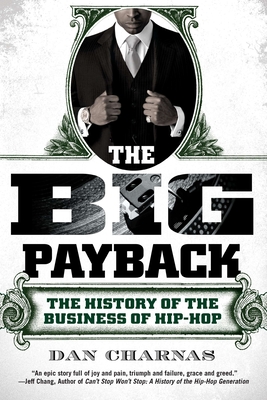 “There has never been a better book about hip-hop…a record-biz portrait that jumps off the page.”—A.V. Club

THE INSPIRATION FOR THE VH1 SERIES THE BREAKS

The Big Payback takes readers from the first $15 made by a “rapping DJ” in 1970s New York to the multi-million-dollar sales of the Phat Farm and Roc-a-Wear clothing companies in 2004 and 2007. On this four-decade-long journey from the studios where the first rap records were made to the boardrooms where the big deals were inked, The Big Payback tallies the list of who lost and who won. Read the secret histories of the early long-shot successes of Sugar Hill Records and Grandmaster Flash, Run DMC's crossover breakthrough on MTV, the marketing of gangsta rap, and the rise of artist/ entrepreneurs like Jay-Z and Sean “Diddy” Combs.

Dan Charnas, a veteran of the hip-hop music business, began his career scouting talent and promoting records for seminal rap label Profile Records and for Rick Rubin’s Def American Recordings. He penned some of the first cover stories for The Source magazine and was part of a generation of young writers who helped create hip-hop journalism. His writing has appeared in the Washington Post, the New York Press, and the Village Voice. He also worked as a segment producer for MTV’s The Lyricist Lounge Show. Charnas holds a master’s degree from the Columbia Graduate School of Journalism and was awarded a Pulitzer fellowship. He was born and lives in New York City.

“A classic of music business dirt-digging as well as a kind of pulp epic.”—Rolling Stone (4-star review)

“As gripping and dense as a prime Jay-Z rhyme...Charnas has done a real service to pop history.”—New York Daily News

“Detailed and colorful…a must-read for fans of the music industry.”—Los Angeles Times

“The rap tome you have to read...The Big Payback focuses not on the beefs you know but on the back-room battles you don’t.”—Details

“[An] exhaustive, engrossing history of the genre.”—Entertainment Weekly

“In a year that has seen plenty of hip-hop books, The Big Payback stands out as a must-read for any fan—or detractor—of the genre.”—Forbes

“One of the juiciest, flat-out most enjoyable books I’ve read in a long time.”—The Atlantic

“[A] stylish, lavishly detailed love letter to the genre and industry...Charnas makes an elegant case for how hip-hop is the consummate art form.”—Publishers Weekly (starred review)

“The riveting dialogue culled from more than 300 interviews makes it seem as if Charnas was in the room for every deal that ever went down in hip-hop, and sometimes he was.”—Austin Chronicle

“Dan Charnas captures an epic story full of joy and pain, triumph and failure, grace and greed with the skills of a journalist, the wisdom of an insider, and the passion of a microphone fiend. Call The Big Payback a hip-hop version of David Halberstam's The Reckoning.”—Jeff Chang, author, Can't Stop Won't Stop: A History of the Hip-Hop Generation

“With an insider's connections and an outsider's perspective, Dan Charnas has written the otherwise untold story of the business of hip-hop. His cast of characters—producers, agents, label executives, talent scouts—is every bit as compelling and dramatic as the musicians themselves.”—Samuel G. Freedman, New York Times columnist and author of Upon This Rock, Who She Was, and Jew vs. Jew

“The Big Payback is a stunning achievement. Not only does it manage to pack in countless unprecedented anecdotes about hip-hop that you can't find anywhere else, the read is effortlessly smooth.”—Cheo H. Coker, co-screenwriter of Notorious and author of Unbelievable: The Life, Death, and Afterlife of the Notorious B.I.G.

“Dan Charnas brings a fan's devotion, an industry insider's savvy, and a reporter's unblinking eye to chronicling a cultural revolution that is as contradictory and complex as the country that produced it. Payback is a bitch.”—Fred Goodman, author of Fortune's Fool and The Mansion on the Hill