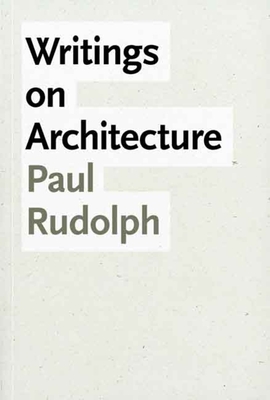 By Paul Rudolph, Robert A. M. Stern (Foreword by)
Email or call for price.
Backordered

The first collection of writings by one of the most innovative architects and educators of the 1950s and 1960s, this book includes a wealth of recently discovered archival materials and many previously unpublished photographs. Featured texts include a selection of Paul Rudolph’s published critical writings, which cover such topics as Rudolph’s views about the architecture and city planning of his time and the proper way to educate an architectural student. Recent controversies about the preservation of many of Rudolph’s buildings—including the landmark Art and Architecture Building at Yale, which celebrates its 45th anniversary and grand reopening in November 2008—make this a timely publication.

Paul Rudolph (1918–1997) was chair of the Yale School of Architecture from 1958 to 1967. He designed projects for institutions and corporations worldwide, developing a personal and distinctive organization of space and gaining renown for his Brutalist concrete structures.