The Yale Book of Quotations (Hardcover) 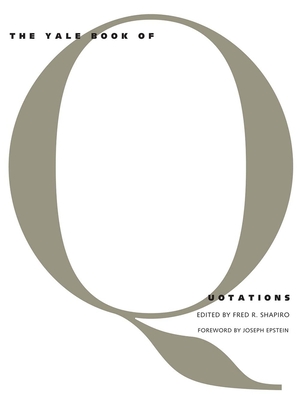 Named the #2 reference book that is essential for a home library by Donald Altschiller, Wall Street Journal

“Shapiro does original research, earning his 1,067-page volume a place on the quotation shelf next to Bartlett's and Oxford's.”—William Safire, New York Times Magazine

“Meticulously researched. . . . a quotations book with footnotes that are as fascinating to read as the quotes themselves.”—Arthur Spiegelman, Washington Post Book World

This reader-friendly volume contains more than 12,000 famous quotations, arranged alphabetically by author. It is unique in its focus on American quotations and its inclusion of items not only from literary and historical sources but also from popular culture, sports, computers, science, politics, law, and the social sciences. Anonymously authored items appear in sections devoted to folk songs, advertising slogans, television catchphrases, proverbs, and others.

For each quotation, a source and first date of use is cited. In many cases, new research for this book has uncovered an earlier date or a different author than had previously been understood. (It was Beatrice Kaufman, not Sophie Tucker, who exclaimed, “I’ve been poor and I’ve been rich. Rich is better!” William Tecumseh Sherman wasn’t the originator of “War is hell!” It was Napoleon.) Numerous entries are enhanced with annotations to clarify meaning or context for the reader. These interesting annotations, along with extensive cross-references that identify related quotations and a large keyword index, will satisfy both the reader who seeks specific information and the curious browser who appreciates an amble through entertaining pages.

Fred R. Shapiro is associate librarian and lecturer in legal research at the Yale Law School. He is a well-known authority on quotations and the editor of The Oxford Dictionary of American Legal Quotations.

"On the analogy of 'Dictionary Johnson,' we call Fred R. Shapiro, editor of the just-published Yale Book of Quotations (well worth the $50 price), 'Quotationeer Shapiro.' . . . Shapiro does original research, earning his 1,067-page volume a place on the quotation shelf next to Bartlett's and Oxford's."—William Safire, New York Times Magazine
"Meticulously researched. . . . To find out who said what and when they did it, Shapiro spent six years poring over hundreds and hundreds of databases, using advanced Internet searches as well as using the more old-fashioned methods of going through microfilms, dusty bookshelves and reading the 1,000 or so other quotation books that are out there to find out the truth. . . . The result . . . is a quotations book with footnotes that are as fascinating to read as the quotes themselves."—Arthur Spiegelman, Washington Post Book World

"The Yale Book of Quotations, handsomely printed, brings modern voices into the company of standbys like Shakespeare, Samuel Johnson and Mark Twain, who squeeze together and make room for B.B. King, Fran Lebowitz, and Stanislaw Jerzy Lec."—William Grimes, New York Times (The Gifts to Open Again and Again)
". . . good-humoured and richly sourced."—Godfrey Smith, The Sunday Times
"This collection of 12,000 quotations is a real treat! The quotes range over literature, history, popular culture, sports, computers, science, politics, law, and the social sciences, and although American quotations are emphasized, the book's scope is global. The authors represented are as diverse as William Shakespeare, John Lennon, Jack Dempsey, both Presidents Bush, J.K. Rowling, Rita Mae Brown, Confucius, Warren Buffet, and Deng Xiaoping. . . . The scope and detail of research here is impressive, and the . . . typeface and layout make the work inviting. . . . Libraries will want to purchase a copy for reference and for circulation, even if they haven't been buying quotation books recently. Every library will want one for circulation because browsing it is such fun."—Library Journal
"Fred Shapiro's The Yale Book of Quotations brings new names, new life, and scrupulous research to the world of great lines. . . . [He] is arguably the nation's preeminent archaeologist of quotations. . . . [The] book is a joy simply to peruse. . . . His annotations constitute a parallel text that lends the book the sort of heft needed to become a standard reference tool, as it inevitably will. The cross-references and historical contexts he offers for quotations are invaluable for future researchers."—Alan Bisbort, Connecticut Magazine
"The power of the demotic gives Shapiro’s book a special charge not shared by other such compilations."—Carlo Rotella, Yale Alumni Magazine

"This is a useful resource for writers, speakers, and preachers."—Christian Century

"The Yale Book of Quotations aims to become the Bartlett’s for a new generation. It may well do it. One thing is certain: It’s a whole lot more fun. . . . An irreverent, uncensored romp."—Steve Blow, Dallas Morning News

"Seems this book would make a great educational game—exercising the brain instead of the joystick finger."—Donna Doherty, New Haven Register

"A handsome and well-indexed compilation. . . . It is not just a compilation but a work of scholarship. . . . In The Yale Book of Quotations, [Shapiro] proves even more diligent than Bartlett was about finding the exact origins and wording of familiar quotations. . . . The historical notes in small type—elaborating on sources and parallels, and sometimes cross-referencing other quotations within the volume—make this a really useful reference work. It is also a profitable (or at least entertaining) way to procrastinate."—Scott McLemee, Inside Higher Ed

"Tired of anglophilic Bartlett’s, with its overused English one-liners? [This is] a major new companion, tilted toward American and pop culture."—Carlin Romano, Philadelphia Inquirer (Worthy of Coffee Table and Reading Too.)

Selected as a 2007 "Outstanding" book by AAUP University Press Books for Public and Secondary School Libraries
Named a Best Book of 2006 by amazon.com
Received Honorable Mention from the Professional and Scholarly Publishing Division of the Association of American Publishers (PSP/AAP) in the category of single-volume reference, humanities and social sciences
Winner of the Bronze ForeWord Magazine Book of the Year Award in Reference
A finalist in the category of Nonfiction for the 2007 Connecticut Book Award, given by the Connecticut Center for the Book

"The Yale Book of Quotations, with Fred Shapiro's original research, will shock many of us out of our state of error."—William Safire, New York Times Magazine