The Passenger Pigeon in Pennsylvania: Its Remarkable History, Habits and Extinction, with Interesting Side Lights on the Folk and Forest Lore of the A (Metalmark) (Paperback) 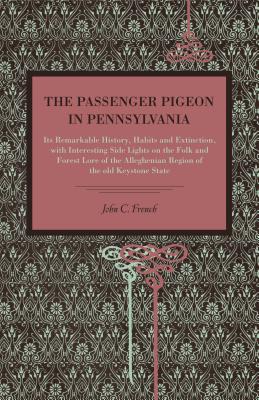 By John C. French
Email or call for price.

The Passenger Pigeon in Pennsylvania, published by the Altoona Tribune Company in 1919, appeared just five years after the bird's extinction worldwide. It contains observations and reflections on the migration patterns and behavior of the passenger pigeon, as well as contributions from local amateur ornithologists and nature enthusiasts, including a chapter written by Henry Shoemaker. The work explores folklore and legends surrounding the bird, its typical behavior and biology, the history of its place in the Keystone State, and its decline and disappearance, while also presenting eyewitness accounts from bird-watchers in the Susquehanna Valley and the Appalachian region.

John C. French (1856-1934) was the author of and contributor to several books on Pennsylvania wildlife, folklore, and music, including Henry Shoemaker's The Black Bear of Pennsylvania and Rafting Days in Pennsylvania. He lived in Roulette, Pennsylvania.