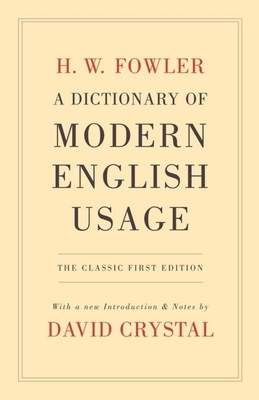 No book had more influence on twentieth-century writers of English than Henry Fowler's Dictionary of Modern English Usage. It rapidly became the standard work of reference for the correct use of English in terms of choice of words, grammar, and style. Much loved for his firm opinions, passion, and dry humor, Fowler has stood the test of time and is still considered by many to be the best arbiter of good practice.
Now Oxford is bringing back the original long-out-of-print first edition of this beloved work, enhanced with a new introduction by one of today's leading experts on the language, David Crystal. Drawing on a wealth of entertaining examples, Crystal offers an insightful reassessment Fowler's reputation and his place in the history of linguistic thought. Fowler, Crystal points out, was far more sophisticated in his analysis of language than most people realize and many of his entries display a concern for descriptive accuracy which would do any modern linguist proud. And although the book is full of his personal likes and dislikes, Fowler's prescriptivism is usually intelligent and reasoned. Crystal concludes warmly that Fowler was like "an endearingly eccentric, schoolmasterly character, driven at times to exasperation by the infelicities of his wayward pupils, but always wanting the best for them and hoping to provide the best guidance for them.... He may shake his stick at us, but we never feel we are actually going to be beaten."
In the concluding section of the book, Crystal examines nearly 300 entries in detail, offers a modern perspective on them, and shows how English has changed since the 1920s. This exciting and long awaited re-release of one of the classic works of English reference will delight everyone interested in language.

David Crystal is honorary professor of linguistics at the University of Bangor, and the author of many books on language in general and the English language in particular, such as The Stories of English (2004), The Fight for English (2006), and Think on My Words: Exploring Shakespeare's Language (2008). His previous lexicographical work includes A Dictionary of Linguistics and Phonetics (6th edn, 2008) and Johnson's Dictionary: an Anthology (2005).