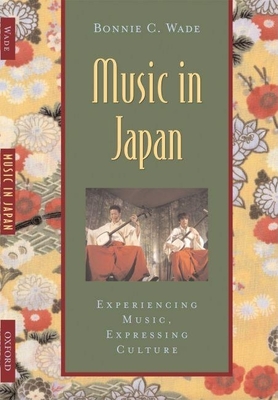 Music in Japan is one of several case-study volumes that can be used along with Thinking Musically, the core book in the Global Music Series. Thinking Musically incorporates music from many diverse cultures and establishes the framework for exploring the practice of music around the world. It sets the stage for an array of case-study volumes, each of which focuses on a single area of the world. Each case study uses the contemporary musical situation as a point of departure, covering historical information and traditions as they relate to the present. Visit www.oup.com/us/globalmusic for a list of case studies in the Global Music Series. The website also includes instructional materials to accompany each study.
Music in Japan offers a vivid introduction to the music of contemporary Japan, a nation in which traditional, Western, and popular music thrive side by side. Drawing on more than forty years of experience, author Bonnie C. Wade focuses on three themes throughout the book and in the musical selections on the accompanying CD. She begins by exploring how music in Japan has been profoundly affected by interface with both the Western (Europe and the Americas) and Asian (continental and island) cultural spheres. Wade then shows how Japan's thriving popular music industry is also a modern form of a historically important facet of Japanese musical culture: the process of gradual popularization, in which a local or a group's music eventually becomes accessible to a broader range of people. She goes on to consider the intertextuality of Japanese music: how familiar themes, musical sounds, and structures have been maintained and transformed across the various traditions of Japanese performing arts over time.
Music in Japan is enhanced by eyewitness accounts of performances, interviews with key performers, and vivid illustrations. Packaged with an 80-minute CD containing examples of the music discussed in the book, it features guided listening and hands-on activities that encourage readers to engage actively and critically with the music.