In the Enemy's House: The Secret Saga of the FBI Agent and the Code Breaker Who Caught the Russian Spies (Paperback) 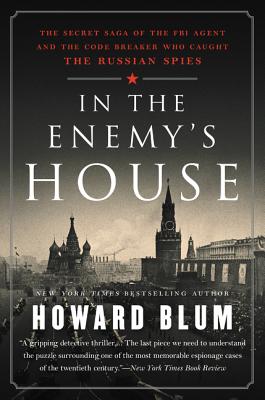 By Howard Blum
$17.99
On Our Shelves Now (PLEASE CALL TO CONFIRM BEFORE COMING TO STORE)

The New York Times bestselling author of Dark Invasion and The Last Goodnight once again illuminates the lives of little-known individuals who played a significant role in America’s history as he chronicles the incredible true story of a critical, recently declassified counterintelligence mission and two remarkable agents whose story has been called "the greatest secret of the Cold War."

In 1946, genius linguist and codebreaker Meredith Gardner discovered that the KGB was running an extensive network of strategically placed spies inside the United States, whose goal was to infiltrate American intelligence and steal the nation’s military and atomic secrets. Over the course of the next decade, he and young FBI supervisor Bob Lamphere worked together on Venona, a top-secret mission to uncover the Soviet agents and protect the Holy Grail of Cold War espionage—the atomic bomb.

Opposites in nearly every way, Lamphere and Gardner relentlessly followed a trail of clues that helped them identify and take down these Soviet agents one by one, including Julius and Ethel Rosenberg. But at the center of this spy ring, seemingly beyond the American agents’ grasp, was the mysterious master spy who pulled the strings of the KGB’s extensive campaign, dubbed Operation Enormoz by Russian Intelligence headquarters. Lamphere and Gardner began to suspect that a mole buried deep in the American intelligence community was feeding Moscow Center information on Venona. They raced to unmask the traitor and prevent the Soviets from fulfilling Soviet Premier Nikita Khrushchev’s threat: "We shall bury you!"

A breathtaking chapter of American history and a page-turning mystery that plays out against the tense, life-and-death gamesmanship of the Cold War, this twisting thriller begins at the end of World War II and leads all the way to the execution of the Rosenbergs—a result that haunted both Gardner and Lamphere to the end of their lives.

Howard Blum is the author of the New York Times bestseller and Edgar Award winner American Lightning, as well as Wanted!, The Gold of Exodus, Gangland, The Floor of Heaven, and, most recently, a 2018 New York Times Notable Book: In the Enemy's House. Blum is a contributing editor at Vanity Fair. While at the New York Times, he was twice nominated for a Pulitzer Prize for investigative reporting. He is the father of three children, and lives in Connecticut.

“The spy hunt set off by the Venona decrypts is one of the great stories of the Cold War and Howard Blum tells it here with the drama and page-turning pace of a classic thriller.”
— Joseph Kanon, bestselling author of Defectors, Leaving Berlin, and Los Alamos

“Blum has managed to provide a fresh look at the familiar story of the Rosenbergs. Indeed, his book may be the last piece we need to understand the puzzle surrounding one of the most memorable espionage cases of the 20th century.”
— Ronald Radosh, New York Times Book Review