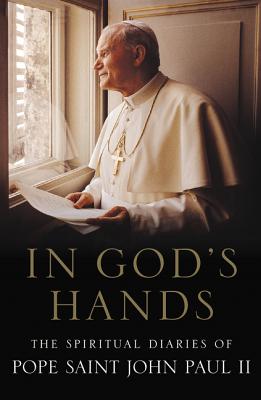 By Pope Saint John Paul II
$39.99
On Our Shelves Now (PLEASE CALL TO CONFIRM BEFORE COMING TO STORE)

Available for the first time in English, the private reflections of the modern pope recently elevated to sainthood—deeply personal writings that reveal a spiritual leader who agonized over his service to God, continually questioning whether he was doing enough.

As the head of the Roman Catholic Church for twenty-five years, from the final decades of the twentieth century to the first years of the new millennium, Pope John Paul II significantly impacted our world. As famous as a rock star, this powerful leader who conferred with numerous heads of state was the ultimate model of wisdom and religious commitment for numerous Catholics around the globe.

Throughout much of his adult life, from 1962 until two years before his death in 2003, John Paul II kept a series of private diaries in which he disclosed his innermost thoughts, impressions, and concerns. Written in his native Polish and never before available in English until now, these journals provide intimate and deeply moving insight into a man, a priest, and a saint’s spirituality and a life devoted completely to God.

In God’s Hands lays bare the soul of this powerful, influential statesman, revealing a devout man untouched by his celebrity status; a selfless servant of God who spent decades questioning whether he was worthy of the role he was called to carry out. Over forty years, from his bishopric in Krakow to his election to the papacy to his final years, one question guided him: "Am I serving God?"

Entrusted to his personal secretary—who defied John Paul II’s instructions to burn them after his death—these notebooks provide us with a privileged glimpse into the life of a humble man who never took for granted his mission or his exalted role in the church and in the world.

Karol Józef Wojtyla (1920–2005), known as John Paul II since his election to the papacy in 1978, was born in Wadowice, Poland. As a young man he enrolled in a drama school but then was forced to work in a quarry and a chemical factory during the Nazi occupation to avoid deportation to Germany. In 1942, aware of his call to the priesthood, he began courses in the clandestine seminary of Cracow. He was ordained to the priesthood in 1946 and then in 1964 he was nominated as Archbishop of Cracow by Pope Paul VI, who made him a cardinal 1967.

During his pontificate, John Paul II inspired literally millions of the faithful through pilgrimages and during his hundreds of pastoral visits around the world, as well as through his many sermons and written works. As the successor of Peter and Vicar of Jesus Christ, he revolutionized the office of the modern pope. He took his mission out of the Vatican and around the globe, pushing back the boundaries of the old Christian Europe, while proselytizing, reforming, and opening new churches around the world.